The State of Search: BERT

On October 25, 2019, Google announced the release of its most recent algorithm update, BERT.

When applied to search, BERT helps better interpret and understand the context of users’ queries in order to provide more relevant search results in Google. At this time, BERT has only been rolled out in the United States, in English, but it will extend to other countries and languages in the future. However, when it comes to populating featured snippets, BERT is being used globally and across all languages.

How BERT Works in Real Life

See the example shared by Google, below. For the query “2019 brazil traveler to usa need a visa”, BERT helps Google understand the role of the word “to” in this particular query: 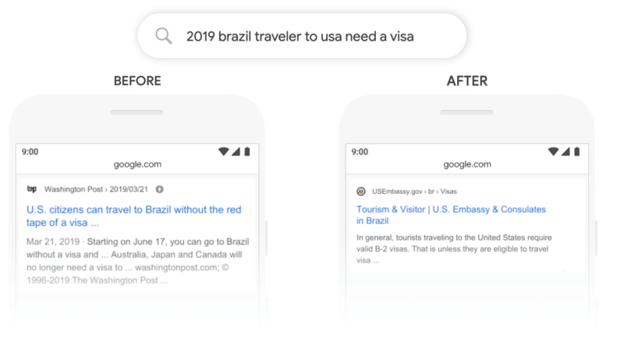 Prior to BERT, Google would return a news article that references U.S. citizens traveling to Brazil in the top position but after BERT has rolled out, Google returns the Tourism & Visitor page of the U.S. embassy in Brazil site which shares much more relevant information that better matches the searcher’s intent with this query.

Kind of a Big Deal

What Does this Mean for Us?

BERT will impact 1 in every 10 search queries made in Google, which is significant. Google’s Danny Sullivan reassured the search community that there is nothing we need to change or do differently on our client sites in relation to this update. He went on to say that “There’s nothing to optimize for with BERT, nor anything for anyone to be rethinking. The fundamentals of us seeking to reward great content remain unchanged.”

Based on the way Google explains the functionality of BERT, our search engine optimization team will closely monitor organic traffic, reevaluate the search landscape of our clients’ priority keywords, and focus on better matching site content with the user intent of target keywords. In addition, producing quality content that fully satisfies users’ queries continues to remain top of mind.