What Does Google's March 2019 Core Update Mean for Your Website?

Earlier this week, Google confirmed that a broad core algorithm update was released on March 12, 2019. While search marketers were originally referring to this update as “Update Florida 2” as it is the second Google algorithm update that has coincided with the popular, annual SEO conference, Pubcon Florida, Google’s official name for this update is the “March 2019 Core Update”.

What is a Broad Core Update?

Broad core updates are refinements to Google’s overall algorithm to better understand search queries and user intent and the site pages that will best satisfy the queries. These improvements help Google to provide better, more relevant results or “answers” to search queries which enable Google to achieve its primary goal of providing the best possible experience for its users.

Past notable algorithm updates like “Penguin” and “Panda” have targeted specific factors within Google’s algorithm like links and content, respectively. Broad core updates are more about the algorithm as a whole.

According to the information provided by Google, the March 2019 Core Update is one of the biggest updates that the search engine has released in years. When Google has implemented major algorithm overhauls in the past, sites can experience significant position changes in the search results. However, the tools we use to monitor algorithm updates have yet to report the usual above average volatility that sites experience during a general, unconfirmed Google algorithm update. 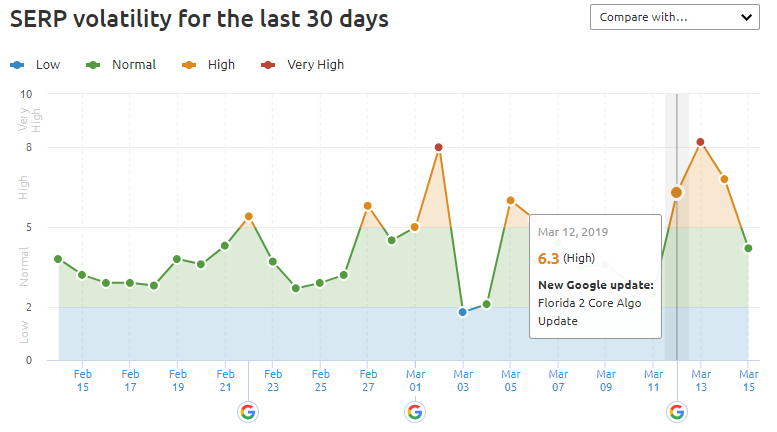 How Did the Algorithm Change with this Update?

It is too soon to tell how the algorithm was specifically updated, but Google will generally divulge some details after it has rolled out major changes to its algorithm. The search industry predicts that Google will likely share general information about how the algorithm has evolved with this update in the upcoming months.

Since the update was released, members of the search industry have been very active online, sharing observations and speculating about how the algorithm was likely changed. According to some leaders in the SEO industry, the March 2019 Core Update may be a rollback of some of the more recent algorithm updates rather than a “broad core” update, as many sites are reporting improvements or recoveries from their position changes after previous algorithm updates. Other industry experts have proposed the possibility of a connection between backlink quality and rankings as there were reports of aggressive spidering by GoogleBot leading up to this update. There was also speculation around possible changes to E-A-T (expertise, authoritativeness, trustworthiness) combined with user intent, which would indicate that Google is focusing more on relevancy.

The exact changes will never be fully known, but we will likely be able to infer some of the bigger elements that this algorithm update touched within the next week or two once it has been fully rolled out.

What Are the Next Steps?

Major Google algorithm updates occur several times a year, but Google representatives have not offered specific recommendations on what webmasters should change if their sites appear to have been negatively impacted by the March 2019 Core Update.

A representative from Google offered the same guidance shared during the March 2018 broad core updates: there is nothing to do to address or “fix” the pages that were negatively impacted by the algorithm update aside from continuing to focus on producing “great content.” Creating and publishing quality content continues to be top of mind when it comes to Google’s algorithm, which is aligned with the search engine’s focus on user satisfaction.

With any Google algorithm update, it is best to not make drastic changes to a site until we are able to gather more information and see the residual, more lasting effect of the update. During this time, we will continue to monitor sites’ organic traffic and keyword rankings for major changes. We are also in the process of auditing the backlinks of each site in search of unnatural links to disavow in Google Search Console. From Google’s perspective, updates to its algorithm improve the quality of search results. Per Google’s recommendation, our focus will continue to be on the quality and relevance of the content published on our clients’ sites.