The State of Search: Indexing Problems

There were no confirmed algorithm updates in June. However, Google announced on Twitter that they were experiencing indexing issues on June 2, which may lead to slightly skewed data for the beginning of the month.

Though unconfirmed, turbulence in the search results from June 22 through June 23, as displayed in the graph below, indicates that Google may have rolled back some of the changes originally made during the May 2020 Core Update: 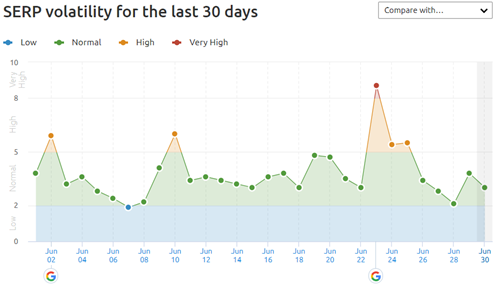 It is common and expected for Google to tweak its algorithm following a major core update. The search engine is constantly testing different ways it can provide the best and most accurate results to its users. During this time, webmasters reported increases in keyword rankings of .gov and .org which may be indicative of measures to display more “authoritative”—the ‘A’ in E-A-T—sites in the search results.

What this means for you

While analyzing organic traffic for the month of June, keep in mind that Google’s indexing issue at the beginning of the month may result in skewed data.

Although the occurrence of a Google algorithm update was not confirmed this month, REQ will analyze changes in client and competitor rankings. During this time, we recommend continuing to focus on creating and publishing content that goes beyond that of competitor sites, and improving E-A-T signals where possible.