The Power of Transparency in Marketing

The internet is a crowded place, and it’s only getting worse. As we all constantly compete for views, likes, retweets, clicks, and conversions, it’s more important than ever to differentiate ourselves and stand out from our competitors.

How do we prove to consumers that we’re the best? We could tell them in the form of a bright neon, flashing ad, but good luck getting them to believe you, or even pay attention to you. We have to work smarter, not harder, in terms of how we communicate with them.

Transparency marketing is a concept that has been around for a while, but it’s amazing how many companies haven’t embraced it. By understanding this concept and incorporating it into your marketing strategy, you can give an edge to your content and better connect with your audience.

What is Transparency Marketing?

Shel Holtz defines transparency as “the degree to which a company shares its leaders, employees, values, culture, strategy, business processes, and the results of those processes with its publics. It’s the opposite of opacity, in which companies operate behind closed doors and shuttered windows.”

Ways for Companies to Be Transparent

Whether it’s through a retouched photo or a top-performing case study, companies do a pretty good job of only showcasing the best versions of themselves online. We are usually only exposed to a brand’s wins and success stories, but that’s only a small portion of real life. People buy from people, not companies. Sure, people care about the quality of the product a company sells, but it’s not the products they connect to, it’s their story, the part that makes them human.

Example: Speaker, author and entrepreneur Jeff Hunter presents a great example of what vulnerability looks like from a business standpoint. One of his Facebook posts got a lot of attention for its blatant honesty and authenticity, and guess what? It paid off. He got tons of support, and even a couple of people wanting to work with him. 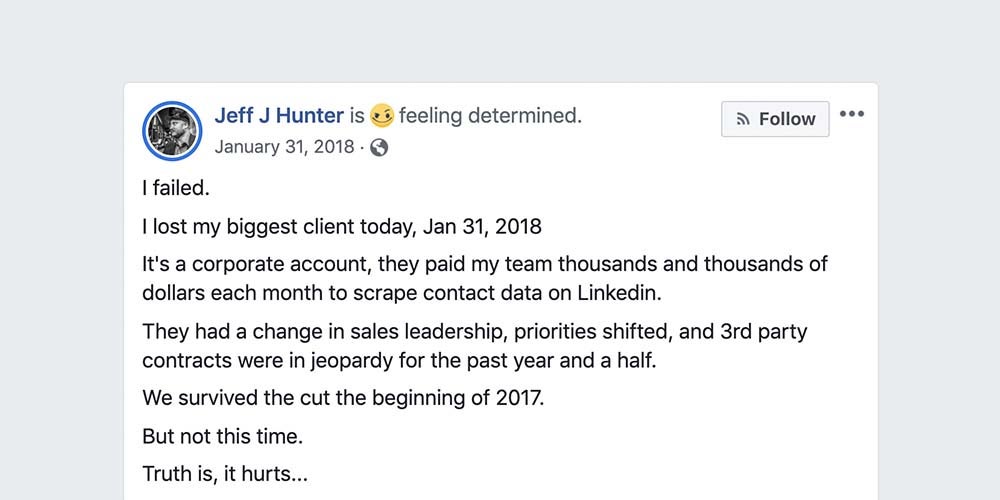 A few e-commerce companies have adopted what is known as “price transparency.” This is when a company is upfront about the cost of materials, labor, and shipping that goes into their products in order to get them to the consumer (including the profit the company is making off of the sale).

Example 1: Everlane is a clothing company that prides themselves in ethical design and transparent pricing. This chart is visible to every shopper on their website:

Everlane noticed that companies in the apparel industry were charging an absurd amount of money for items that cost them little to make. They saw an opportunity to educate their customers and implement fair pricing for the same quality items at a fraction of the price.

Example 2: Southwest Airlines saw a similar issue within their market of airlines charging $100 or more in hidden booking fees. They came up with the marketing campaign “Transfarency” to show that they do in fact offer low rates, but without adding on miscellaneous fees.

Understandably, some companies may not want to showcase their earnings on their website, but the moral of the story is that people like understanding why your prices are the way they are (especially if they’re higher than your competitors). They like to know that they’re paying a fair price versus being taken advantage of by a company.

When Tuft & Needle decided to raise the prices of their mattresses, rather than hoping no one would notice, they wrote a blog article to explain the reason behind these increases. Being transparent about their price increase ahead of time saved them from dealing with the backlash of customers complaining or calling them out for being greedy.

As previously discussed, your story sells the product, so if your brand has a story to tell, tell it. That story may not necessarily be about you but who you’re helping.

Are you supplying jobs to people in third-world countries? Is your brand mission about utilizing local materials and resources? People want to know who you’re helping so that they can feel good about giving you their support.

Some of the largest brands (Patagonia, Toms, Starbucks, West Elm, etc.) have made it their mission to help those in need. We like their products, but more importantly, we like what they stand for.

Whether you’re addressing rumors, allegations, or you flat out messed up, it’s better to speak up and acknowledge the facts rather than leave people to make up their own assumptions.

Example 1: McDonald’s Canada wanted to address unflattering myths about its food and ingredients. They launched a campaign giving customers the opportunity to ask them questions regarding their food and processes in an effort to debunk any rumors as well as educate customers about how they operate. 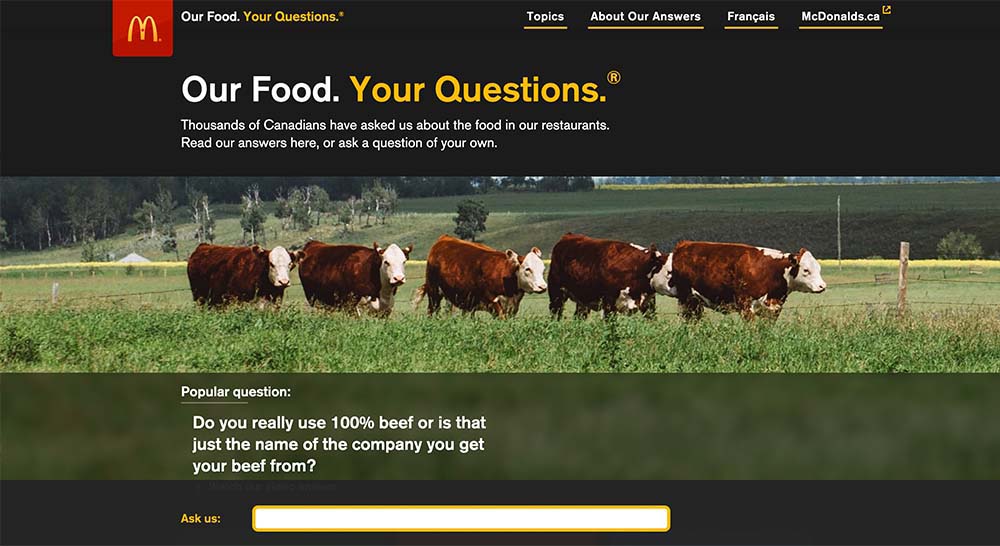 Example 2: Comedian Aziz Ansari was caught up in a scandal regarding a sexual misconduct allegation. He took some time off for a while, but once his Netflix special aired, he addressed it, rather than sweeping it under the rug. He could’ve made it the butt of one of his jokes or acted like it wasn’t a big deal, but instead he gave a heartfelt speech about how we should all be more careful about how our actions are perceived by and may affect other people.

Corporate apology ads have been increasingly popular with large companies such as Facebook, Domino’s Pizza, and General Motors. When done right, they can be effective. When poorly executed, they can come across as insincere and possibly cause even more damage.

Example 1: A few years ago, Wells Fargo got in trouble for creating millions of fraudulent savings and checking accounts on behalf of their clients without their consent. In order to address this, they released an apology commercial to the public called “Earning Your Trust.” The commercial opens with the bank’s origins in the Old West, references the scandal, and fast-forwards to depict bank employees and happy customers, as a narrator assures viewers: “It’s a new day at Wells Fargo.” The dramatic Old West montage paired with an empty promise that everything at Wells Fargo is finally good again came across as contrived, insincere, and inauthentic to many people.

Example 2: Uber released a similar apology video called Moving Forward after the company was associated with sexual harassment charges, driver mistreatment, and more. The new CEO, Dara Khosrowshahi, spoke directly to the viewer, coming across way more sincere than Wells Fargo’s video. He talks about Uber’s core values, takes responsibility for their mistakes, and gives specific ways he’s going to improve the company. “When we fall short, we commit to being open, taking responsibility for the problem, and fixing it,” he says.

What’s Next for Transparency?

The FDA has already implemented laws that require certain types of nutrition transparency (whether on food packaging or menus at restaurants). Will transparency start to become a mandatory practice for other industries?

Bruno Pieters, fashion designer and former art director of Hugo by Hugo Boss, believes "If you don't do it now, you'll have to adapt when complete transparency becomes mandatory. I think it's wiser to be a leader who's ahead of the rest rather than being behind because, you know, it will become mandatory one day.”

People value honesty, authenticity, transparency, and good communication. We are all a part of a “need-to-know” culture. On one spectrum, we need to know what our favorite celebrity had for lunch, but on the other end, we want more clarity from companies we choose to give our money to. We all want to see behind the scenes, and the sooner you can break down those barriers and open up your doors, you can show people what you’re really about. After that, they will start to trust you and want to do business with you.